The Churches of Kythnos

Hills and beaches with the white chapels, the magnificent Byzantine churches and the old monasteries constitute an integral part of the Cycladic landscape. In the Cycladic islands the reputation of a church is so great that it is considered as its trademark. Such examples are the islands of Tinos, Paros and Kythnos (the latter with Panagia Kanala, the beloved Virgin Mary of the island).

In Kythnos, apart from the churches located in the two villages, there are around 130 chapels depicting the religious faith of the people of the old days. Built for centuries, they are preserved by the contemporary people with reverence so as to be intact for the yearly festivities in honor of a holy saint. A cypress tree, usually planted in the courtyard of each chapel, adorns the chapel and can be seen from a long distance acting as the landmark of the chapel. Chapels mark their location so strongly that quite often the name of the saint they are dedicated to becomes also the name of a whole area such as Saint-Sostis, Saint-Giannis and saint-Stefanos which are also the names of the ports of Kythnos.

The visitor of the island will have the opportunity to visit remarkable post-Byzantine churches in Chora and Dryopida. In Chora important architectural monuments with old icons are mainly Agia Triada, Agios Savvas, Theologos, Agios Nikolaos etc. In Dryopida, the temple of Agios Minas is remarkable, with a wood-carved iconostasis, a despotic throne and wonderful icons. The only old temple, whose frescoes are preserved, albeit worn, is the Holy Trinity in the Venetian castle of Katakefalos.

The monastery of Panaghia Nikos had been used as a school for more than forty years before and after the revolution of 1821. The students were not only locals but also children from other areas of Greece. The monastery of Saint Elias, built on the highest hill of the island, appears to have been built at the site of an ancient temple. Due to its position it was chosen by the German conquerors as a base and observatory during the Second World War.

Besides their historical, religious and social role, white chapels, post-Byzantine churches and monasteries provoke the admiration of visitors for their simplistic, yet superb, folk architecture.

The Church of Panagia Kanala

The church of Panagia Kanala is located in the southeastern part of the island and is one of the most important places of pilgrimage in the Cyclades, as the icon of Panagia (Virgin Mary) there it is considered to be miraculous.

According to tradition, the icon of Panagia was found by the fishermen in the narrow-canal – between Kythnos and Serifos. That is why it was named Panagia Kanala (Virgin Mary of the canal). The icon is an excellent work of the Cretan School and it is hosted today in the above mentioned church built in 1869.

Every August 15th, there is a big religious festival there which includes the procession of the icon and a reenactment of how it was found. 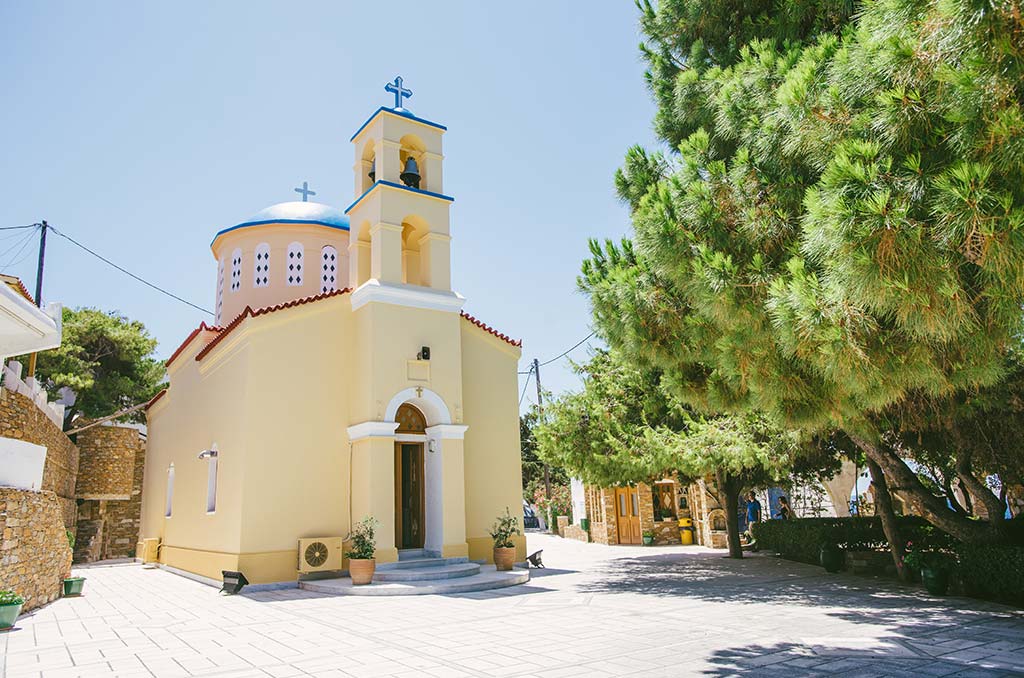 The Monastery of Panagia Nikos

Outside of Chora is the Monastery of Panaghia Nikos. The monastery took its name from the Byzantine icon Panagia “Nikopoios” (Virgin Mary the Victorious). The monastery is built on the ruins of ancient temples. Today, only the central part of the monastery is preserved. During the years of the Ottoman domination, just before 1821, the monastery sheltered the Great School under the leadership of the Greek literature teacher Makarios. A legend accompanying the icon is that it had been transferred to Kythnos right after the fall of Constantinople and from here, the Venetian conquerors took it and placed it in the church of St. Mark of Venice where it is kept until today.

In the southwest of the island, at Flabouria bay, there is an important ecclesiastical monument, the Panagia Flabouriani, built on the edge of a rock. According to tradition, the traces from the beach to the church are the traces left by the Virgin Mary Herself.

Panagia Stratilatissa (Virgin Mary, the Army Commander) is located in the middle of Kythnos, about 3 km south of Dryopida. The iconostasis of the Church has significant post-Byzantine icons. 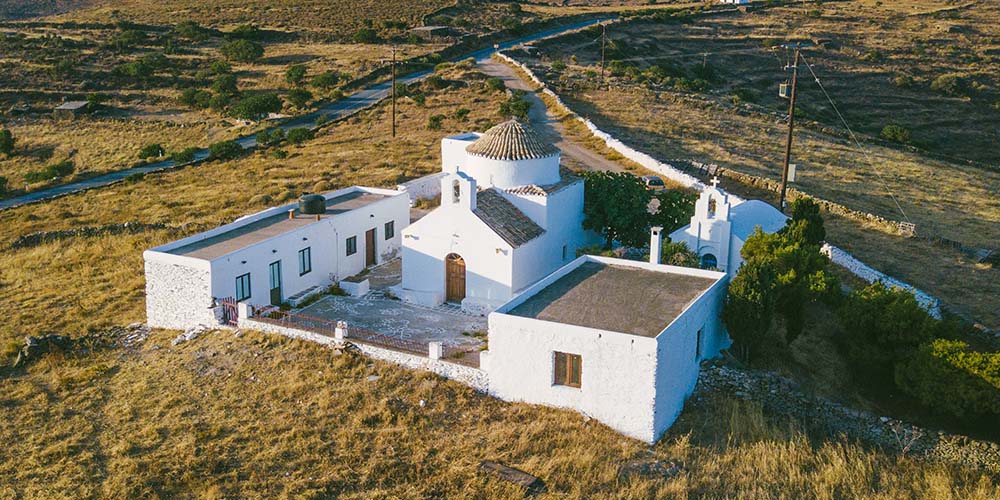 The church of Saint Minas

The church of Saint Minas is the trademark of Dryopida. It is worth visiting and admiring its wonderful wood-carved iconostasis, the unique folk art of despotic throne, as well as its wonderful epitaph.

The Church of Saint Savvas

The church of Saint Savvas is located in Chora. Before entering the church, the visitor will notice the sign above the door, showing the date of it was built (1613).